From esports caster to full-stack developer

A year and a half ago, my first blog post was about the tech stack I had settled on for League of Legends data analysis. At that time, I had only re-started software development for about a month.

Since then, my libraries have gone through numerous reworks, and I have tried a lot of new tools and packages. As the Valorant API is dawning on us and I will develop a complete stack for it as well, let’s see where I stand today!

I decided to pick up python for my data analyst position, despite having never worked with the language before.

The language was getting more and more traction and its environment seemed very mature.

I don’t regret it a second, and I still think it was the right choice. The python language and tools really make it a breeze to develop, especially when working locally or creating quick scripts to answer the team’s questions.

But python makes it difficult to share your code with non-technical people, for example to allow them to launch a data analysis script by themselves. Installing python and recreating the right python environment can be a tall ask, and creating GUIs in python is also far from trivial.

This is why I have started learning Javascript, as it is the de-facto language for front-end development nowadays. Even if you are building a native application, chances are you are using Javascript with a framework like Electron. I aim to learn React to create private data visualisation websites for the teams I work for. This is a tall mountain to climb, but it is going to be a great learning experience!

Regarding my IDEs, I am still sticking with Jetbrain’s products at the moment, and in particular PyCharm. I bought its pro version and the database management features are really great, as well as its python interactive console.

Unfortunately, I feel like PyCharm is starting to stagnate when it comes to the very latest development technologies, and I would like to learn using VS Code in the future. I always try to use open source tools as it simplifies collaboration, and VS Code has been growing at a staggering pace. As Jetbrain’s Javascript IDE does not have a community version, I will start using VS Code for Javascript, and will work on moving my python workflow there too!

At the very beginning I used conda to handle environments. As it was poorly documented and very big for deployment, I moved on pretty fast.

I first switched to using venv, managed mostly by PyCharm. While fully featured, it is squarely separated from package managements that if left in pip’s hands, and sometimes it can get messy to properly see where you are installing your packages. Deployment was made with repeated pip freeze -r > requirements.txt, which is not painless.

With venv, I also needed pyenv for python version management, which is a great tool… As long as you’re not on Windows. It was not an issue as I was developing on Mac OS and deploying on an Amazon Linux 2 server at that time. But when I worked to make my scripts run on Windows, I easily lost about two days setting up my python environment.

Then, about a year ago I started using pipenv, which was my main solution until very recently. Pipenv handles both environment and package management, and is aimed at reproducing python environments identically.

Overall, pipenv was great, but working with private git repositories and development versions of packages was unfortunately very annoying.

This is why I am now using Docker everywhere in my development process. My development environment as well as my production applications are now simply Docker images, which I can use on any host, with any os, without having to care about python versions or available compilers.

But this was far from painless.

Using Docker on Windows for python development through Pycharm is still a relatively new option, and Docker itself has a pretty steep learning curve. I plan to write a blog post about my Docker setup in the future, as I haven’t found any good source regarding full python development in Docker. I would not recommend using Docker if you are just starting to develop in python.

Despite that, suffering through all this was definitely worth it, as I can now run the latest version of my parser on any server by simply typing:

The only things I need to do to enable that on a new server is to install Docker, register to my Docker repository, and create the right environment and docker-compose file. That’s definitely way easier and sustainable than installing a full python environment and managing it through git.

I also plan on moving to Linux for my development OS pretty soon, as I ran into multiple Windows-specific issues recently with Docker. For example, I cannot install the WSL 2 Windows update because it clashes with dependencies coming from games I play on the same machine. Properly separating my personal OS and my development OS should be better in the long run, so I will start working from a Kubuntu dual boot soon.

In my first year as a data analyst, I focused on the data we found on the official Riot API. Unfortunately, they lack critical information. Picks and bans order is not recorded, and Chinese games are not available.

Therefore, I started working closely with Leaguepedia a year ago. As their data is open and meant to be easily queriyable by everybody, it was perfect. They manually input picks and ban for professional games as well as end of game stats for games with chrono break, making them one of the most reliable sources.

Accessing their data also meant I was able to spot human errors very fast, and I quickly came to work with Leaguepedia editors and staff to help maintain the wiki.

Since Leaguepedia staff spent a lot of time helping me access their data, I released leaguepedia_parser earlier this year to make sure they would not have to redo that work with other analysts. I am also working on a full refactor (currently in alpha) that will use my new League of Legends game data structure, but that will be the subject of another post!

As Leaguepedia and I were doing very similar things in regard to professional games parsing, we also decided to pool our efforts together on that front. I am proud to say that today new games on Leaguepedia are parsed entirely with code I wrote thanks to help I got from them, oracleselixir.com, and gol.gg. It will make their maintenance of the website’s tools much easier in the future.

The important thing to get from this is that it’s always better to make allies than foes. By making a conscious effort to help Leaguepedia and spending time developing tools with them, I now have access to much better data.

I always strive to make data access as open as possible as I think more cooperation leads to more reliable data and maintainable code. I hope other actors in esports analytics see that and start working together in the future instead of pitting everyone against each other for access to basic game information.

As I have said, one of the issues I faced with working in python was giving access to data to the rest of the team. While I can write detailed reports, coaches often want to access the data themselves.

The first tool I developed on that front was a Discord bot. Discord is pretty ubiquitous in the gaming community by now, and discord.py is a great package to create powerful bots. With embeds, files attachment, and pure python code, you can give access to the data in multiple formats. 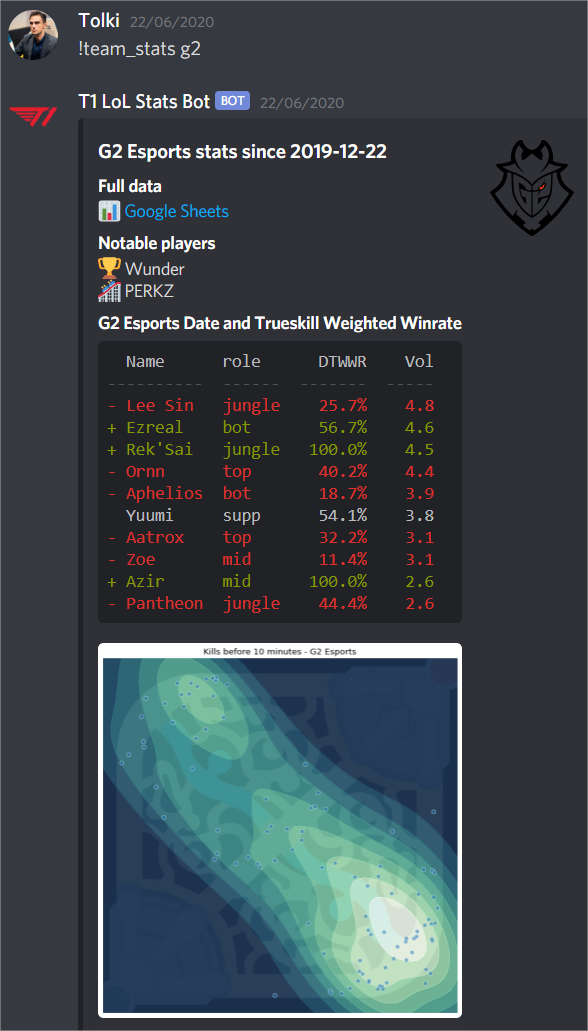 For example, my !team_stats command outputs an embed table, a kill heat map file attachment, as well as a google sheets link to have a complete data export.

Working entirely in python allows for very powerful functionality in the bot, in particular the google sheets integration for export through gspread_pandas.

My first version of the bot ran purely in python, requiring a pretty complex python environment to run and connecting directly to the database. This is hard to maintain, and means tons of analytics functions I built were very closely linked to the bot’s functionality.

I was hesitating between RDBMS and NoSQL solutions when I started, and quickly settled on SQL RDBMS. By now, I don’t think learning how to use a document-based database like MongoDB would bring me anything more than an SQL database. As LoL game data is heavily structured, SQL allows for very complex querying at crazy speeds.

SQL and python usually means SQLAlchemy, and this is no exception. My SQLAlchemy package is the core of my work, and I am always working to add functionality to it. I must have read the documentation at least 10 times and still don’t understand half of it, but it’s great.

SQLAlchemy also made it much easier to switch database systems. I used MySQL, sqlite, and PostgreSQL over the past months, and all my data is now in an RDS PostgreSQL instance.

I also moved to caching all JSONs I received from any API endpoints on Amazon S3, as data has been shown to sometimes disappear in the past.

My stack has gone through multiple iterations, but I am finally at a point where I can say it is well designed and maintainable.

I learnt everything by myself over the last year and a half while being a data analyst, which has been challenging at times. As I am approaching the end of my current refactor, I will be able to focus on data analysis for the foreseeable future.

And when I say foreseeable future I mean the two weeks until the Valorant API gets released!

You May Also Enjoy

In my two years working on League of Legends data, I have acquired data from: The Riot Games API The Leaguepedia API Community s...

Docker is the new be-all-end-all of environment management for software development. By providing a concise and heavily customizable way to handle dependenci...

How to organize coaching in League of Legends is still a pretty contentious point. Each team has its own way of doing it, and the coaching staffs varies wild...

From underdogs to Worlds quarter finalists — A year at Splyce

This is the first in a series of articles looking back at my year 2019. As the introduction, this one is pretty personal and focused on what I learned during...